If you enjoyed the Angry Birds series there is a never ending runner game called Sky Punk you will need to try yourself to believe it. This game has fantastic artwork in the game, with the world of Neo Terra all around you. The game is a racing style game where you are on a sky board similar to a podracer you might see in Star Wars, or a flying surfboard.

The object of the game of course is to get the fastest time and the most coins, but just because you won the race it doesn’t mean you have to stop. The race keeps going so you never have to have it end. Of course this means you are on the same course and don’t get to see the other courses that way. Each course has its own great visuals in Sky Punk allowing you to see how much work was placed into the artwork. And the game play is pretty simple since all you need to do is run your finger as the guide where you want to go.

Collect coins and upgrade your player giving them different abilities and enhancing them as you level up. Or purchase a new player and upgrade them instead. The game never ends and you will never want it to as you get hooked into being a Sky Punk. 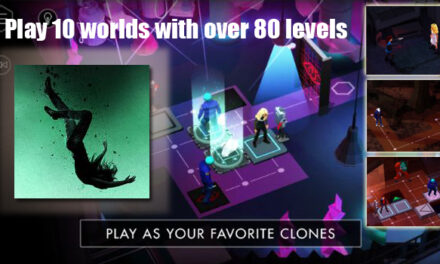